Prior to Round 3 at Suzuka, which was postponed several times due to the spread of COVID-19, Round 4 was held at Twin Ring Motegi from July 17th to 18th.
In SUPER GT before the Corona disaster, the final race in a chilly November was held at Motegi. However, last season it was held twice in September and November, and this year it is held twice in July and November. This was the first SUPER GT event to be held in July.

For Hatsune Miku GT Project, which started in August 2008, this race was also the 100th milestone in the SUPER GT series.
(Excluding races such as JAF-GT series, Total 24 Hours of Spa, SUZUKA 10 HOURS.)
To commemorate this, the message “100th Race Celebration/SUPER GT GT300 Class” was displayed on the underside of the rear wing of Car 4 Good Smile Hatsune Miku AMG, and the 13 former “Racing Mikus” were displayed on the top. At the same time, a commemorative PV titled “100th Race Commemorative Video” was released online, raising the attention for this race.

Also for this round, the Balance of Performance (BoP) was reviewed. The performance adjustment weight was reduced from 60kg in the two previous races to 45kg. Still, the gross vehicle weight of 1330 kg is the heaviest car in its class. As a result of achieving the top prizes in the previous two races, there are rivals whose Success Weight (SW)/formerly known as Weight Handicap (WH) exceeded 70 kg. But the SW of car 4 is 9 kg, which means the weight difference was decreased overall. For drivers Nobuteru Taniguchi and Tatsuya Kataoka, it’s a race where they want to aim for the top prize.

For the third race of the season, the team was getting a good response in the tire test. They started official practice on Saturday with Kataoka “Moteoka” (Kataoka who is good at “Motegi”) as the driver, since he professes to be good on this circuit.
At the 9:20 am course opening, the temperature was already 26℃, and the road surface 31℃; Kataoka still recorded a good time from the beginning in conditions that felt like a midsummer day. After some checks in the pit, he recorded a personal best of 1:48:410 and secured the top of the class at that point. After 14 laps, the machine was entrusted to Taniguchi earlier than usual.
Taniguchi, who took over, gave a long run pace centered on the 1 minute 50 second range, and completed nearly 30 consecutive laps with one pitstop. In the qualifying simulation for the GT300 class only, Taniguchi continued to hold the steering wheel and recorded a 1:49:232.
In the end, 1:48.410, which Kataoka recorded in the early stages, became the best time and they ended the session in 2nd place. There was a good feeling giving hope that “we might just get a pole position” (Taniguchi).
Then official qualifying Q1; a grouping system with a total of 29 cars was adopted again, and car 4 went to the Q1A group. With Group Q1A starting at 2:15 pm, Taniguchi drove onto the course. Under the scorching conditions of 33℃ air and 45℃ road temperature, Car 4 improved its time for 2 consecutive laps from the 3rd lap that was timed. With a 1:48.683, he broke through the cut off line in 4th place and advanced to Q2.
Following Q1B group and the GT500 class Q1, Q2 started at 3:08 pm. Kataoka entered the race with the goal of winning pole position. On the second lap of the timed laps, he set the fastest time of the day with 1:48.265 and was in 3rd place. Although he attacked continuously with the aim of further improving the time, he was unable to improve his personal best in sector 1 because the line was blocked by another vehicle. At this point, he gave up improving the time and returned to the pit. The final race started from the 5th grid position.

It’s another midsummer day with the hot sun shining down from the morning. The pit walk, which was a popular event before the Corona disaster, has been canceled since last season as a countermeasure against infections. Instead, “PIT VIEWING” was held from the morning, where you can see the pits of each team from the pit lane, although there are no drivers or race queens.

At 11:35 am, Car 4 Good Smile Hatsune Miku AMG finished the warm-up run before the final of the 100th SUPER GT race in 6th place overall. The strategy was constructed around the trusted “minimum pit stop”. Pit-in would be when the specified distance of one-third of the total imposed on all drivers has been exhausted. The strategy is to change drivers, return to a vacant space on the course, to earn lap time in the latter half of the race in a clean state.

At 1:10 pm, at the start of the formation lap, the temperature was 33℃ and the road surface was 51℃, making it even potentially dangerous.
In front of the “Starter” Kataoka, who started from 5th grid, were two NISSAN GT-R NISMO GT3s, which boast outstanding strength among FIA-GT3 vehicles. Also, two GR Supras of JAF-GT were lined up; they can choose a no-tire change strategy using the lightness of the vehicle as a weapon. As usual, the strategy is to aim to overtake at the beginning. If they can’t raise the position in the early stages, they planned to change the tires on the left two wheels in order to keep the pit-stop time as short as possible.
The safety car exited and the race started. The team’s bad predictions hit the mark and the position could not be improved in the early stages, and the lead group immediately fell into a stalemate. Car No.56 (Realize Nissan Motor College GT-R), Car No.52 (Saitama Toyopet GB GR Supra GT), Car No.4, and Car No.88 (JLOC Lamborghini GT3), which specializes in Motegi, were in a train.
A high-level battle was fought, while being conscious of driving to protect the tires against the scorching road surface, and not forgetting to put pressure on the opponents in front and behind.
After the 10th lap, the ranking did not change even after the leading group of GT500 class caught up. After that, when the pit window opened, Kataoka jumped into the pit almost at the minimum at the end of 19 laps, as was originally planned. Rather than running in a stalemate situation, they aimed to increase the pace in a vacant space.
Car 4 Good Smile Hatsune Miku AMG finished changing the tires on the left two wheels and sent Taniguchi to the course in 19th place without any loss. A few laps later, cars 56 and 88, which had been battling in the early stages, left the front due to contact.
On lap 28, when the rivals had almost finished their routine work, they “returned” to the apparent 5th position. However, because there were three undigested pits in front, the position was actually 2nd place behind car 11 (GAINER TANAX GT-R).
In Round 7 of last season, they won the podium in 2nd place at Motegi. Car 4 just wants a “victory” to recover what was left on the table last season. Taniguchi was persistently chasing the No.11 GT-R wearing Dunlop tires, with director Takanori Aki saying, “I could see that the time would drop if the opponent was in a long run.” But the gap could be closed.
On lap 37, a problem occurred in car No.35 (arto RC F GT3). A fire broke out from the vehicle while driving, and the machine was urgently stopped on the inside of 130R. As a result, the Full Course Yellow (FCY) introduced from the previous race was posted, and all cars were limited to 80km/h.
Car 2 (muta Racing Lotus MC) which saw an opportunity made a pit stop just before the FCY was posted. After finishing the pitstop, they succeeded in returning to the course in the lead. As a result, after the FCY, car No.4 was effectively dropped to 3rd place.
Two laps later, the GT500 car that came into contact with car No.31 (TOYOTA GR SPORT PRIUS PHV apr GT) stopped at the final corner, causing another FCY. After the release, car No.52, which was pressing from behind, got ahead with it’s braking at the 90 degree corner from the downhill straight after running in parallel.
On the 55th lap, they were also overtaken by GR Supra’s No.244 car (Takanokonoyu GR Supra GT), and finally finished in 5th place, which was the same as the start grid order.

GOODSMILE RACING & Team UKYO and Car 4 Good Smile Hatsune Miku AMG was not able to win a memorable “100th race victory”. Although they were able to select tires that were relatively competitive based on the results of preliminary tests, they struggled with the pace at the end of the race due to replacing the left two tires. However, after an 8th place and winning points in Round 2 Fuji, they were able to finish the race week on a positive note with a 5th place at Motegi. They are looking to accelerate this trend at Round 3 Suzuka, which will be held from August 21st to 22nd (scheduled). 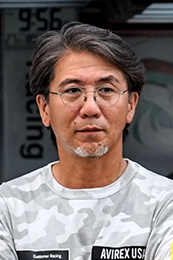 Team Owner: Aki Takanori
In the official practice on Saturday, from the previous test results, we started out as expected, with a feeling that “this is about the right pace.” Then, I was like, “Oh? Maybe everyone else is off?” and thought that we might have an advantage. There was a slightly harder compound tire, but we couldn’t choose it because there wasn’t enough grip, so it was a process of elimination.
The strategy was to win the championship. With a minimum pit stop and exchanging the two left, I think that it was a very solid strategy and that everyone carried out the mission precisely. So the feeling is “it can’t be helped if this doesn’t work” and this time I’m more disappointed than usual. We were enthusiastic about the 100th race… However, it’s good to be frustrated like this in the spirit of racing. 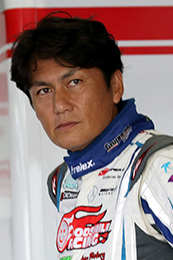 Driver, Nobuteru Taniguchi
From the feeling on Saturday, I was confident that the pace of the long run would not be bad. Of course, it’s not that we are faster than the other cars, but it also doesn’t feel like we are “just participating” as usual. It was like, “I think I can race a little.”
Once the finals started and we had battled it out, I was hoping that I could somehow aim for the podium, preferably the championship. I made the minimum selection, because I wanted to run in a space before the left and right tires became unevenly worn, and I didn’t want the race ruined by the safety car either. But, exchanging two tires was a little tough in the second half, and instead of chasing the front, it became just aiming for the finish line. Of course I wanted to win, and I’m very disappointed with 5th place, but it feels like “I was able to race for the first time in a long time.” 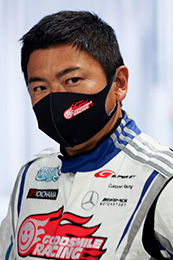 Driver, Tatsuya Kataoka
As you can see “it’s not good enough”. We’ve come to the point where we can confirm that “it’s not good enough”, but until now we were so far away that we couldn’t even tell by how much “it’s not good enough”, so I’m hopeful in that sense. This result is disappointing because it was looking good for a moment. As the 100th race, it’s a memorable event and I’m happy that it was a race that put a little hope into the people who supported it. However, it also made me disappointed because it gave us some hope, and we confirmed that “it will be hard in the future too”.
The next Suzuka round is also a power circuit, so if you are conscious of competing in the race, it’s important to gauge “how good?” the performance is in qualifying. I don’t see it yet, including for the performance in qualifying.